Famed aviator Amelia Earhart landed her aircraft here in Derry in May 1932, becoming the first female to fly solo across the Atlantic, and capturing imaginations with her thirst for adventure.

Almost a century on, the courageous trailblazer has a new accolade: Derry’s first ever gin, named in her honour.

Natural botanicals, plucked from the very field where Earhart landed, mingle with juniper berries to create the deliciously refreshing, small batch Earhart Gin. You can try it for yourself it in selected LegenDerry bars and restaurants, or pick up a bottle to savour at home. Serve with light tonic and a twist of lemon peel, or let the gin’s elderberry tones really take flight by adding lime, mint, elderflower syrup and cloudy apple juice, topped off with soda water.

Look closely at its label and you’ll see a message in the bottle, too: a vintage map of Earhart’s route across the Atlantic. We’ll drink to that. 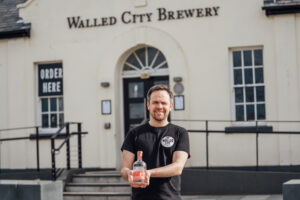 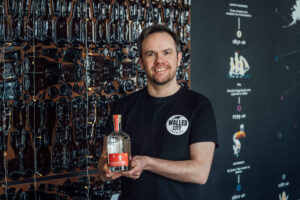 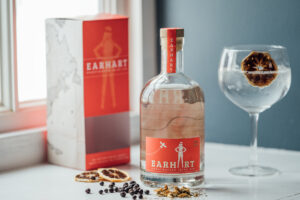 This independent, family-run store champions craft beer, cider, whiskey and gin from the North West and beyond.

This cosy farm shop are bursting with fresh produce, home baking, artisan fare and the ripest fruit and veg.

Foyster was dreamt up during late-night, beer-fuelled chats about how to promote the Lough Foyle Flat Oyster

This family business celebrates the bracing Atlantic Ocean on our doorstep with its oak-smoked salmon and more.

The motto at the family-run Rough Brothers microbrewery is ‘beer for beer lovers’.

Carrick Foods has two signature products: a moist and moreish Stout City loaf, made with buttermilk and dates, a...

Named after our saying, ‘D'you think I came uppa Foyle in a bubble?’ these are sweet, dreamy bubbles of waffle.

Pie in the Sky

Whether you’re an American soul food fan or a sultan of spice, you’ll find your perfect pie here.

A family-run business, Foyle Bia Mara has exported its shellfish to French connoisseurs for decades. Now, it del...

Moore on the Quay

Along Derry’s bustling quay, as the River Foyle winds its way through our city, you’ll find a slick black food t...

When you bite into a Dart Mountain Cheese you’re experiencing more than just a delicious, award-winning product.

Having a dilemma as to which LegenDerry Food product to choose? We’ve done the hard work for you and packaged so...

Pop in to grab coffee and a freshly made bagel or salad bowl from the deli, stock up on sweet bakes and Scarpell...

This new distillery, based in Aghyaran near the beautiful Sperrin Mountains, has developed an exciting range of ...

For more than a century, Grants have been making mouths water with their acclaimed range of pork, bacon and ham.

New Life Force's tasty range of kombucha drinks are rich in nutrients, enzymes and probiotics, and low in sugar.

Look out for this silver truck at festivals & local events & savour a hot cup of their delicious house blend.

On a mission to deliver a great chocolate experience without compromising on ethical or fair-trade values.

What began as a pastime has blossomed a fully-fledged passion- handpicked just outside the city.

Paying homage to the city’s much-loved brown ‘ding’- the perfect combination of tangy and fruity.

Any cookies that may not be particularly necessary for the website to function and is used specifically to collect user personal data via analytics, ads, other embedded contents are termed as non-necessary cookies. It is mandatory to procure user consent prior to running these cookies on your website.

Analytical cookies are used to understand how visitors interact with the website. These cookies help provide information on metrics the number of visitors, bounce rate, traffic source, etc.

Performance cookies are used to understand and analyze the key performance indexes of the website which helps in delivering a better user experience for the visitors.

Advertisement cookies are used to provide visitors with relevant ads and marketing campaigns. These cookies track visitors across websites and collect information to provide customized ads.